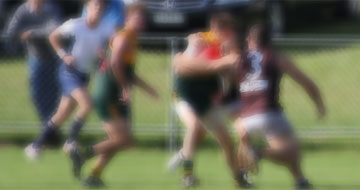 The Hampton Rovers Football Club is leading a world-first research study, which is looking into the effects of concussion in sport. Developed by Smart Head Play, the study is being undertaken by Dr Alan Pearce at Deakin University.

There has been significant debate in recent months about concussive and sub-concussive events in sport, and the long-term effects they have. Channel Sevens Sunday Night program recently ran a story on former Brownlow Medallist Greg Williams. Williams is showing signs of the degenerative brain disease Chronic Traumatic Encephalopathy (CTE), with him unable to recall large chunks of his playing career and personal life. There is evidence to suggest that this is possibly caused by knocks Williams suffered during his playing career.

|MORE| View the article on the Herald Sun website >>

As part of the Hampton Rovers study, around 40 senior players have come forward and have had their brain function and brain activity tested, giving a baseline result. Throughout the season, the players will be monitored and observed during games and training by representatives of Smart Head Play and Club trainers. If and when a player receives a head knock, they will be regularly re-tested a number of times in the days following the event.

All players will then be retested at the conclusion of the season, where they will have their results match up against their pre-season results.

Senior President Matthew Gray says when the opportunity came up to be part of the study, the club jumped at it. Across all levels, the health and safety of our players is paramount  its our number one priority. The study we are participating in will provide actual data which will be able to be used by medical experts and peak sporting bodies, which will highlight the risk the players are at if and when a head injury occurs.

Concussion in sport is a huge topic at the moment and the recent reports both here and overseas has been quite alarming. We are the only local sporting club in Australia taking part in such a study and were excited to be on the cutting edge. We hope that the results produced will raise further awareness of the issue and will help work towards reducing the long-term impact of head injuries in sport.

If the results show impairment, we will ensure we are proactive in protecting our players, and ensure that the players recovery and return to play is managed as per Worlds Best Practice  which seems to be currently coming out of the USA.

CTE is a slow-burn degenerative brain disease. It is caused through multiple knocks to the head, but does not present itself until a period of time after the event. Currently CTE is only identifiable in a postmortem. Those suffering from the disease may show symptoms of dementia; such as memory loss, aggression, confusion and depression, which generally appear years or many decades after the trauma.

Former Hampton Rovers coach Matthew Robbins was one of the first former AFL players to raise the issue in Australia. Robbins suffered multiple concussions throughout his 146 game AFL career, and he is highly concerned about the potential issues he may face later in life. During his playing days, Robbins was diagnosed with depression. He has endured years of headaches and chronic migraines and wants better rules in place to protect footy’s next generation.

Smart Head Play is leading the way in developing other areas including concussion education, risk mitigation and rehabilitation.