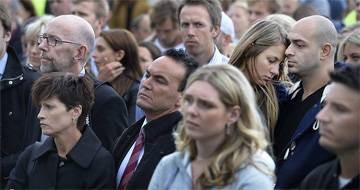 Hampton Rovers FC hosted a 1200-strong public rally on Friday 1st February on behalf of the Corp family to remember Elsa, whose life was brutally cut short, and to push for parole reform.

So far over 6,000 people have signed the petition, both at the club on Friday and online.

They mean people on parole for sexual and violent crimes who are convicted of other offences would likely be sent straight back to jail.

Daniel Corp said the changes were what should have been in place all along.

His sister Elsa was murdered by a man who had committed a series of crimes while on parole, yet was free to walk the streets.

Elsa was 26 when she was killed by David Patrick Clifford during a drug-induced psychosis in 2010, while he was on parole and bail.

He received a minimum of 19 years in jail for killing Elsa.

Mr Corp said she would have been protected if tougher controls were in place three years ago."It can’t bring back Elsa, but (the changes) can protect people in the future," Mr Corp said.

"We sat down with Corrections, and they were very reasonable and hopefully these changes can make a difference."

Premier Ted Baillieu said this was what Victorians expected.

"Parole is a privilege, not a right and community safety has to be the priority," Mr Baillieu said.

Corrections Minister Andrew McIntosh said it was "common sense" that prisoners on parole for violent or sex offences who committed similar crimes were re-jailed.

The case has received significant media attention with multiple articles in the Herald Sun and local papers including the front page of the Herald Sun in late January and has appeared on the major news bulletins. Channel 9 News crossed live to Boss James Reserve prior to the rally commencing on Friday.

For more information, please visit the Facebook page:
www.facebook.com/ElsaJanetCorp
Please show your support by Liking the page and refer to the multiple links.

Click here to read more from the Herald Sun.