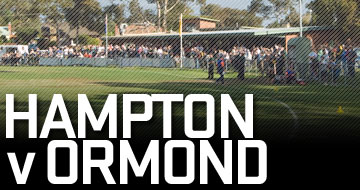 Hampton Rovers wont have to wait long to rekindle their arch rivalry with Ormond, with the two clubs set to face each other in round one of the 2013 VAFA season at Boss James Reserve.

As always, its sure to be a bumper crowd at the Boss as the two clubs with a total of 166 years of VAFA history go head-to-head. Last time they met was Round 18, 2009, with the Rovers getting up by 4 points at Boss James Reserve to confirm they remained in Premier B Section for the following year.

With a new coaching panel including Guy Martyn, Owen Lalor and Steve Kennedy, the Rovers have been working hard on player recruitment over the off-season and to date have been successful with the likes of Danny Corp, Stuey Burggraaff and Kyle Pinto already committing, with more names to be announced over the coming weeks.

Meanwhile, former Hampton Rovers coach Matthew Robbins has confirmed hell be pulling on the boots for Ormond in 2013 as they too look to return to success.

Following round one at home, the Rovers will face two weeks on the road taking on the two promoted sides, Bulleen-Templestowe and Prahran Assumption before returning to Boss James to face Williamstown then Glen Eira. Round six will see the Rovers travel to Old Mentonians. Read the VAFA’s preview here >>

The Rovers will close out the 2013 home and away season at Boss James Reserve against Whitefriars.

The full 2013 VAFA fixture is now available and can be viewed here.