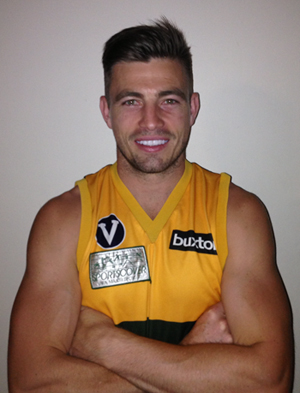 By nominating Hampton as his home club, Hughes is able to play with the Rovers when he is not required to play at Port Melbourne.

Hughes joined the Rovers in 2001 as a junior, playing 43 junior games and 9 senior games.

After playing with the Sandringham Dragons in the TAC Cup in 2003 & 2004, Hughes joined the Sandringham Zebras in the VFL in 2005 when he made his senior VFL debut as well as taking out the Reserves Best & Fairest.

Hughes dedication to his rehabilitation and desire prove that he could make it at AFL level impressed Melbourne so much that they re-drafted him in 2009. In Round 7 of the 2010 season, Hughes was selected to make his AFL debut against the Western Bulldogs at the MCG, kicking a goal in his first game.

In 2011 Hughes headed west, joining Subiaco in the WAFL. In his first season with the Lions, he played in the WAFL Grand Final and was also selected in the WAFL Team of the Year.

In 2012, Hughes came back to Melbourne and joined Box Hill in the VFL.

The Hampton Rovers are very fortunate to have Hughes back involved with the Club. He will be a regular around the Club in 2013, and is looking forward to the opportunity to pull on the famous green and gold jersey once again.

Hampton is such a great Club. Having been involved at a number of footy clubs over the last few years, the thing that stands out to me is the fact that we take for granted the opportunity to play with your good mates. Whilst I had some great opportunities at a higher level, playing with my mates is something I really missed. With Marto (Guy Martyn) and Corpy (Daniel Corp) back involved and Mitzi (Matthew Gray) as President, I am looking forward to being involved and hopefully see the club enjoy some success. Hughes said.