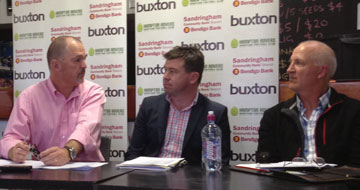 The 2012 Hampton Rovers AFC Annual General Meeting was held Monday evening at Boss James Reserve, wrapping up a reasonably successful year for the club and an exciting future.

Chaired by the Mark Brayshaw, the short and sharp annual meeting was held in front of around 35 people. Financially, the club made a small profit in 2012, but more importantly, made its final repayment on the loan for the clubrooms redevelopment therefore the club is now debt-free. The financial results were especially impressive considering the club had limited access to Boss James Reserve earlier in the year due to the resurfacing and also the seniors lack of on-field success.

Following his three year stint as senior president, Jim Westhead handed over the reins to Matthew Gray. The appointment has generated a spark of excitement around the club with a new quality coaching panel selected and a host of players committing to return to the club in 2013.

There are a number of fresh faces on the 12-person senior committee with additional faces on various sub-committees bringing the total number up to 20. Brett Yorgey will again lead the juniors in 2013 after doing an outstanding job in his first year. The role of Sponsorship coordinator remains vacant so anyone interested should contact the club or Brett directly.

Hard copies of the 2012 Annual Report were available to those in attendance and it can now also be downloaded from the website  click here (PDF).