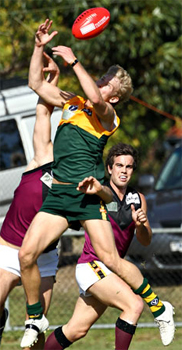 With pre-season training only days away, the Hampton Rovers Football Club is proud to announce that former player Daniel Corp has committed to returning to the Club for 2013 and beyond.

A Hampton Rovers junior player, Corp played with the Sandringham Dragons in the TAC Cup in 2003 & 2004 where he was captain, before joining the Sandringham Zebras in the VFL.

After a number of senior appearances with the Zebras, he joined VFL rival Frankston in 2008, making his name as a reliable utility.

2010 was spent travelling overseas, where he won an AFL Canada premiership with the Central Blues in Toronto, before returning to the Rovers to see out the season.

The entire 2011 season Corp played with the Rovers, kicking 24 goals, before returning to the VFL in 2012 re-joining Frankston.

Corp, 26, said he made his decision to return to the Club for a number of reasons.

There are great people involved who have a strong vision for the future in returning the club to on-field and off-field success. They have worked hard recently in ensuring that the programs are in place off-field, and given some new coaching appointments and players returning to the club, I’m really sure that the on field success is not far away.

Passionate about the future direction of the Club, Corp is keen to take an active role with the juniors, putting his hand up to coach the Under 16s. He will also assist with the planning and delivery of the pre-season training.

Corp is a massive asset to the club, not only from an on-field point of view where he will have a huge impact, but also off-field where he will bring his professional attitude and elite preparation to the young and promising list.

Training kicks-off this Monday the 26th of November at 6:00pm. All players, new and old, are encouraged to come down and become part of the resurgence of the Hampton Rovers Football Club. Full details here >>