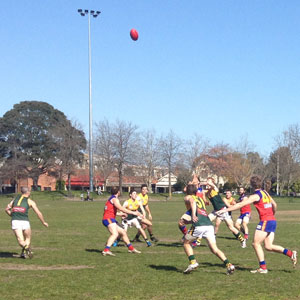 Hampton Rovers ended their 2012 C section campaign with a disappointing result at Brunswick Street Oval, falling to their biggest defeat of the year.

In what was Russell Barnes 100th and final game in charge of the club, the Rovers faced a white-hot Fitzroy side that had everything to play for  a top two finish. Russell mentioned following the game that it was his heaviest defeat as a coach.

In perfect conditions at the former home ground of the VFL side, Hampton started well. Successive goals to Jack Sperring and Ed Turner saw the Rovers trailing by just three points mid-way through the first term. The home side was inaccurate and at the first break they led by 21 points.

It wasnt until mid-way through the second quarter that Fitzroy put their foot down and punished the Rovers. By full time, they had notched up a massive score line of 33.22.214 to Hamptons 4.2.26.

While the Rovers had struggled in the first half of the season, the second half had been much improved however a number of players missing on Saturday saw the boys struggle against superior opposition.

Fletch was best for the Rovers again and was well supported by Tim Witherow and Jay Dillon. Ed Turner was the only multiple goal kicker with two.

Russell Barnes has done a great job despite the loss of an abundance of players over the past two seasons. Almost 60 players have pulled on the green & gold in the seniors in 2012 and that includes many youngsters whove gained valuable experience which bodes well for the clubs future.

Russell will be farewelled at the 2012 Presentation Night on Friday 14th September at Sandy by the Bay. Click here for details and to book online >>

As a result of finishing bottom on the 2012 C section ladder, Hampton Rovers will be relegated to D1 section (or Division 1 as its officially known as now) for the 2013 season. Planning is already well advanced to ensure next year is a successful one with the search for a new coach already underway.