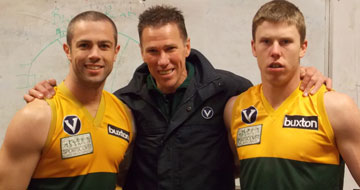 Russell Barnes will coach his 100th and final game for the Hampton Rovers Football Club this Saturday against Fitzroy at Brunswick Street Oval.

Russell announced following last weeks loss against Monash Blues that he would step down following the final game of the season.

This is Russells second stint at the club  he previously spent three seasons as senior coach, the first of which he won the C section premiership in 1998.

Russell has had many achievements in his playing and coaching careers in the VAFA and Saturday will be another one when he coaches the Rovers for the 100th time.

The club has had two tough seasons on-field with the loss of many players but the coach has remained positive throughout and younger players have benefited greatly from being exposed to senior football.

All supporters are encouraged to come along this Saturday to watch the Hampton Rovers take on third-placed Fitzroy at the historic Brunswick Street Oval in the final game of the 2012 season and Russells final game in charge of the club.

The senior committee is working tirelessly to ensure the clubs on-field fortunes improve in 2013. Several exciting announcements will be made over the coming months while discussions regarding the senior coaching position have already commenced and the club will officially advertise for the role immediately.

Russell will be officially recognised at the 2012 Presentation Night on Friday 14th September at the Sandringham Football Club. CLICK HERE for full details and to book online >>