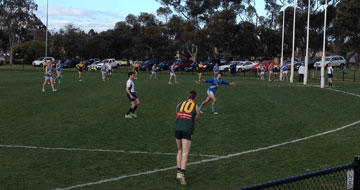 Hampton Rovers hosted their final home game of 2012 and had a disappointing result, going down to Monash Blues by 38 points.

The day started well with another bumper attendance at the pre-game Presidents Lunch  this time with over 100. The strong off-field support has definitely been a highlight of the year.

There was a strong wind favouring the David Street end and the visitors won the toss and kicked with it in the first, scoring four majors to nil. In fact only three goals were scored at the northern end throughout the game.

The game was lost for Hampton in the second term. The home side had all the play but couldnt convert  kicking 2.11 to Monash 1.4. From then on, nothing went the way of the green and gold. Interesting umpiring decisions, send-offs, it all went pair-shaped as the Rovers played their final game in front of their home fans for 2012.

It was great to see the continuing development of our youngsters  Charlie Kelso winning in the ruck, Speedie Macpherson controlling his wing, Tim Witherow creating opportunities and Ollie Armstrong really working hard to keep the ball. At the other end Sam Clements was having a good day as was Adam Power and Fletch who was at his devastating best. Jack Massie probably had his best game for the year and was the link man in a number of our successful forward thrusts. It was clear that Richie Atkins is gaining confidence following his return from injury.

Following the game, Russell Barnes announced he would be stepping down as senior coach following the final game of the season against Fitzroy.