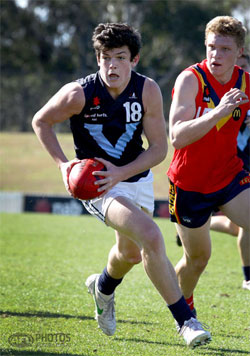 Hampton Rovers junior Angus Brayshaw has been selected in the level one intake of the 2012 AIS-AFL Academy.

The AFL nominated 62 of the nations best young footballers to be included in the sixteenth AIS-AFL Academy intake.

This is the second intake of the expanded two-tier model. All players will receive an Australian Institute of Sport scholarship.

Level one will be coached by AFL Engagement and Talent Coordinator Chris Johnson. Players were selected from the recent NAB AFL Under-16 Championships that were held in Sydney. The squad of 30 will tour New Zealand in January.

Angus, who was named MVP for Vic Metro in the recent championships, looks to have a bright future ahead of him at AFL level and the Hampton Rovers Football Club congratulates him on his latest achievement.