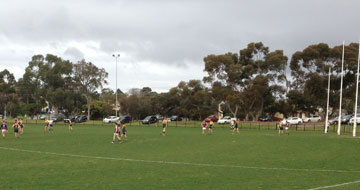 Hampton Rovers kicked their highest score of 2012 but still went down by 68 points to PEGS at Boss James Reserve on Saturday.

In was an improved performance in some regards, but also disappointing in part. The Rovers won the second and fourth quarters, but the difference was in the first and third terms where PEGS (Old Essendon) piled on 20 goals.

There wasnt a huge wind advantage, yet 31 of the 41 goals during the game were scored at the Thorburn Rd end.

Hampton saw the return of their younger players from school football commitments, but it was Pegs who came out of the blocks firing, banging home a staggering 12 goals in the first quarter. Speedy McPherson kicked the Rovers first and the home side managed another two for the term but it was the visitors who led by 55 points at the first break following a high scoring quarter (95 points).

The Rovers stepped up their game in the second stanza. The visitors opened the scoring but Hampton soon responded. Sam Clements kicked his second in a row which was the Rovers fourth consecutive goal.

Leigh Fletcher kicked a great running goal, followed by a goal from Michael Chief Fletcher, back playing seniors for the first in a while, and the margin was reduced to six goals. A goal from Pegs increased the margin to 41 points at half time.

The second half was just about a repeat of the first. Eight Pegs goals to the Rovers one in the third term blew the margin back out.

Hampton finished strongly though, kicking five goals in the last while restricting the visitors to just the two. The Rovers were pushing to post 100 on the scoreboard but fell just short, still it was Hamptons highest score of the season.

Next week Hampton make the short journey to Parkdale to take on the Vultures in round 16 of the VAFA season. The following week its the final home game of the season against Monash Blues.

In the Reserves, the Rovers started well, leading by two goals early. Kicked three in the first quarter to lead by 12 points at the first break, but only managed one goal four for the remainder of the game to go down by 99 points. Mark Short, Garry Giasoumi and Lachie Wheeler were best for the Rovers.

In the early game, the Under 19s faced the tough prospect of taking on ladder-leaders De La Salle and tried hard but were convincingly defeated. Campbell Jones, James Massey were amongst the best for the Rovers.