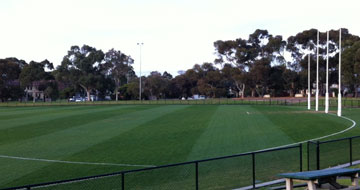 Hampton Rovers play their second-last home game of 2012 this Saturday when they host PEGS FC at Boss James Reserve in a triple-header also involving the U19s taking on De La Salle. Lunch bookings are now being taken.

The sixth-placed PEGS (formerly Old Essendon) easily defeated the Rovers in their last outing at Essendon in the first half of 2012 but Hampton has improved since then and will be looking for a much improved performance with the return of several players into the line-up.

Get along to support the boys in the penultimate home game of the 2012 season. Seniors kick-off at 2:00pm with the Reserves at 11:40am. Updates will be provided on Rovers Twitter.

Its also the second-last home game Presidents Luncheon of 2012. Weve had excellent numbers for the entire season and were looking to finish the season on a high with big attendances to the final two lunches. Just $30 per head for the best lunch in the ammos. Book online by clicking here or contact Gary Nash on 0407 313 054 or email.