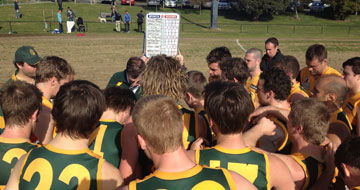 Hampton Rovers faced Old Camberwell on Saturday and had a great first term but couldnt continue that form for the remainder, going down by 98 points. At Beaumaris, the U19s recorded their third win of the year.

Last time the two teams met it was a 179-point victory to the Wellers and the Rovers didnt want a repeat of that scoreline. It was sunny but breezy conditions at Gordon Barnard Reserve and the middle and wings were wet and muddy.

It was an upbeat start by the Rovers and they kicked the opening goal of the game through Richard Atkins who was pushed after he kicked the ball. That resulted in a free kick in front of goals, which he kicked to put the Rovers 12 points up. Rovers went on to kick another two for the term including a great running goal to Jesse Donald while the home side managed two for the term.

Hampton held an 11-point lead at the first break. Thats where the fun ended for the Rovers though. Old Camberwell quickly kicked the first of the second term and went on from there, booting 12 for the term to the Rovers two to lead by 43 points at the main break.

They extended that margin to 61 points at three quarter time and 98 points as the final siren blew. The Rovers were goalless in the final term with the only highlight a screamer to Ed Turner.

The Reserves were down on personel and struggled with Old Camberwell recording a big victory.

The Under 19s recorded their third victory of the season, defeating local rivals Beaumaris by 32 points. Nick Taylor stared with four goals, Care, Jewell and Zaina all kicked two. Amongst the best were Massey, DeLisle and Mullenger. Full results here.

This week, its a triple-header at Boss James Reserve as the Seniors and Reserves take on PEGS FC in the second-last home game of 2012 and the Under 19s play De La Salle. Bookings are now being taken for the pre-game Presidents Lunch  click here for details and to reserve your seat.