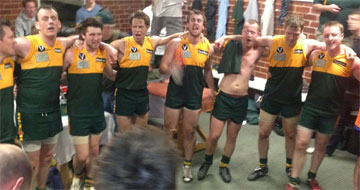 Hampton Rovers faced Rupertswood at the Boss on Saturday and it was the Reserves who cracked their first win of the season while a ten minute period in the third lost it for the Seniors.

It was a big day in perfect conditions at Boss James Reserve with a triple-header and our sold-out Breast Cancer Lunch, celebrating AFL Womens Round.

It was the Reserves who stole the attention as 140 people looked on from inside the clubrooms. With ten minutes remaining they were ten points down but not to be denied, goals to Ryan Warren then Matthew Gray stole the game from Rupo with the Rovers getting up by ten points. It was reminiscent  of the Gold Coast Suns win a couple of weeks back and so were the celebrations.

Matthew Gray, Ben Woodland and Tom Cougan kicked two each while Stephen Anderson, Liam Woodland and Ryan Warren were best for the Rovers. The players then proceeded through the social rooms to the cheer of the large crowd and sung the song in front of the seniors to rev them up.

The Seniors made their grand entrance onto Boss James Reserve and performed well, except for a 10 minute period late in the third quarter where the visitors pilled on seven unanswered goals to blow out the margin.

The first quarter saw accurate kicking from both sides, three goals straight to five goals straight and Rupo holding a 12 point lead at the break. The young Rovers side bridged the gap in the second term and at the main break it was only three points the difference.

The third term started off relatively well, it was goal-for-goal, a rush of blood saw then saw an easy miss for the Rovers and shortly after all hell broke loose and at the main break, all of a sudden Rupertswood held a game-winning 48-point lead.

The last quarter was an even one, the Rovers managed three goals to two to win the term but the game was done  final margin 42 points to the boys from Sunbury. Nick Lyall and Alex Ross kicked two each while best were Richie Atkins, Jack Wilson, Matt Care and Sam Clements.

In the early game, the Under 19s struggled against third-placed Peninsula, suffering a hefty defeat. Jordan Mayne, James Massey and James Short in for his first game of the year were best for the Rovers while Sam Care was the sole goal kicker.

Next week its another triple-header at Boss James Reserve with the U19s taking on Monash Blues at 9:20am, followed by the Reserves at 11:40am and Seniors 2:00pm against Mazenod. The Life Members Luncheon will commence at 12 midday  click here to book.

Following the game at 6:30pm, our $1,000 DRAW FUNCTION will be held at the club. Make sure you stick around for what will be a big night. Purchase your ticket(s) in advanced by seeing Ben Kezilas at Tuesday training or behind the Bar on Thursday evening. Your chance to win a grand  dont miss it!