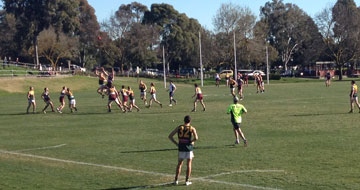 Hampton Rovers travelled out to Bulleen to take on ladder-leaders Marcellin on Saturday. A 23 point deficit at the final break was extended to 57 points by the final siren.

The Rovers had some seven changes from the previous round and again fielded an extremely young side. Conditions were perfect for footy on Saturday with a spectacular Melbourne winters day.

Hampton started positively but it was the home side kicking the opening goal of the game. Nathan Smith kicked the Rovers first and Marcellin quickly responded. A couple of questionable 50 metre penalties gifted the Eagles two goals and turned the game their way, going on to kick seven for the term to the Rovers three, the last of which was kicked by Richie Atkins, playing his first senior game since an injury in round one.

The Rovers continued to play good footy and it was the young guns showing plenty of promise. Tim Witherow kicked a goal to reduce the margin and keep the Rovers in the game. At half time the margin was 33 points.

The third term belonged to Hampton as they pressured the opposition forcing turnovers and put together some great passages of play. An Ed Turner goal reduced the margin to 22 points and the three quarter siren sounded soon after with the Rovers well and truly in the contest.

Unfortunately for the Rovers, they were unable to continue on in the final term. Some silly mistakes gifted Marcellin goals and a some easy goals late in the game gave them seven for the fourth quarter to the Rovers two. The final scoreline certainly was no indication of the Rovers effort against the ladder leaders.

Rovers coach Russell Barnes was pleased with the effort shown by his side following the game.

Next week there is a bye for the Seniors and Reserves while the Under 19s are in action against St Bedes Mentone Tigers away. After the break, the Seniors host Rupertswood at Boss James Reserve.

Click Here to watch a full match replay of the game >>