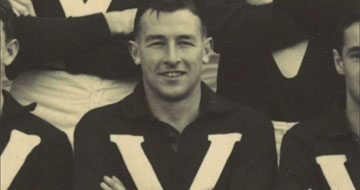 Doug was one of three champions inducted into the prestigious group with John Jones and Shane Maguire also inducted.

Doug captained the Hampton Rovers between 1948 and 1951. His final year as skipper was when the club won its sole A Section Premiership in the VAFA. He won the senior Best & Fairest on four occasions, is a Life Member of the club and was inducted into the Hampton Rovers Hall of Fame in 2004.