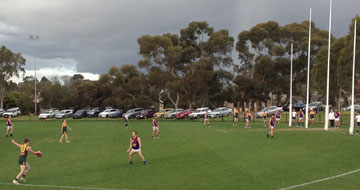 Hampton Rovers continued their improvement but again werent good enough to take the four points as they went down to Banyule by 47 points at Boss James Reserve on Saturday.

The Rovers didnt get off to an ideal start, managing just the one goal to Banyules four in the opening term but three goals to one in the second term reduced the margin to just four points at the main break.

Hampton had five inclusions going into the Round 10 clash including a number of young guns available due to school holidays while two players made their senior debut for the club in Nathan Smith and Oliver Armstrong.

Kicking towards the David Street end in the third, the Rovers could again only manage a single goal while the visitors pilled on five to stretch the margin. While they were never blown out of the water as per the first half of the season, Banyule never really looked threatened in the second half. They put on seven goals in the final stanza while the Rovers kicked four as the rain started to come down.

Josh Speedy McPherson was best on ground for the home side and he was well supported by Ed Turner, Matt Innes, Leigh Fletcher, Jesse Donald and Adam Power. Turned finished the day with four goals and McPherson three.

Prior to the game, it was another great luncheon with 75 people in attendance including a number of recent past players of the club. Next week the Rovers travel to Bulleen to take on Marcellin before the second weekend-off for the year.

Click Here to view a full match replay of the game >>

In the Reserves, the Rovers were equal with Banyule at half time but the visitors took control of the game in the second half to run out with a 25-point victory. Shem Curry was best on for the Rovers while Richie Atkins who played his first game since injuring himself in Round 1, kicked three goals.

The Under 19s couldnt follow up their first win of the season, as they went down to St Marys Salesian by 48 points. Lachie DeLisle was best for the Rovers with Tim Jones kicking four goals.