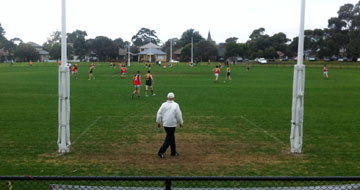 Hampton Rovers are slowly but surely on the improve, putting in their best performance of the season on Saturday against second-placed Fitzroy. Meanwhile the U19s had their first victory of 2012, defeating Beaumaris.

While most grounds in Melbourne were well and truly under the pump following our dismal weather recently, the new surface at Boss James Reserve held up remarkable well and was enjoyed by all players during Saturdays triple-header.

The Seniors got off to a good start kicking the first goal of the game and mid-way through the term it was three goals apiece. A further three goals from the Lions gave them the advantage at the first break and they went on in the second term, kicking three goals to one to lead by 37 points at half time.

The Rovers didnt give up though, and they produced their best quarter of football in the third term. Three quick consecutive goals saw the margin reduced to just 16 points. The boys were playing great footy and gave the Rovers faithful something to get excited about. The visitors responded with three goals, however the home side did kick five for the term  a season high  and coach Russell Barnes was ultimately pleased with his young side.

It was a big day for the Fitzroy Football Club with their inaugural Hall of Fame later that night and they were keen to take control of the game in the final term, and that they did as the Rovers switched off, booting seven goals while the Rovers managed just the one. The final margin of 71 points didnt to the Rovers performance justice. It far outweighed anything seen thus far in 2012 and has given hope of a win hopefully not too far away.

Tom Youl was best for the Rovers and was well supported by Jesse Donald, Ed Turner, Sam Clements back from injury, Leigh Fletcher and Jay Dillon up from the U19s who made his senior debut. Both Turner and Youl kicked three goals each.

Next week the Rovers are back at Boss James again, taking on Banyule in Round 10 of the 2012 VAFA season. A special luncheon for past players is being held prior to the game and will hopefully spur the young Rovers side on to another improved performance. (Click here for details & to book)

The Reserves went down to Fitzroy, but on a positive their accuracy was spot-on, kicking three straight. Shem Curry, Ryan Warren and Matt Powell were best for the Rovers.

The big story was in the early game though, with the Under 19s notching up the first win of 2012, defeating Beaumaris by 48 points. It was a great performance by the young Rovers side, increasing their lead at each break, finishing with 11 goals to 3. Jordan Mayne kicked 4 for the Rovers and Nick Taylor 2. Mayne was best on ground and well supported by James Massey, Lachie DeLisle, Luke Morcom, Tim Jones and Josh Pavlou. It was a great performance by all players though and new coach Jay Watts was absolutely delighted to get his first win at the Rovers.

It was another great Presidents Luncheon prior to the main game and we were lucky enough to have Melbourne Vixens vice-captain Chelsey Tregear as guest speaker. This coming Saturday its a special past-players luncheon and were expecting a bumper attendance. Not just past players are welcome though, as always everyone is, so make sure you reserve your spot now and enjoy the best lunch in the ammos! Click Here for details.