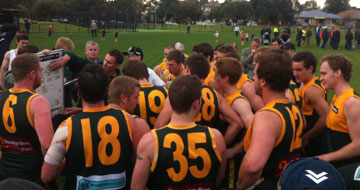 Hampton Rovers hosted local rivals Parkdale Vultures at Boss James Reserve on Saturday and after a promising start, the Rovers slumped to their seventh straight loss.

Former Bulldogs player Rick Kennedy was guest speaker at the pre-game lunch and spoke well to another great turn-up of over 60 people, of the similarities of what the then-Footscray FC found themselves in to what the Rovers face on-field this year.

He also spoke to the players prior to the game and they responded kicking the opening two goals of the game. However the Rovers would not kick their next goal until the third term. The margin was 29 points at quarter time and blew out to 89 points at the main break.

The Rovers won the third quarter, kicking two goals while restricting the Vultures to one and it was appreciated by the big crowd. Small steps but something to build on. Unfortunately they couldnt maintain that in the final term, allowing Parkdale to kick away and win the game by 117 points.

The two teams last met in 2008  on that occasion it was the Rovers winning by 129 points. Unfortunately the situation has been reversed on too many occasions in 2012 as a result of key departures. However the young side keeps giving their all and sticking at it and after seeing the huge upsets in the AFL this weekend, anything is possible if players remain committed.

Adam Power had another great game for the Rovers and was judged best, well supported by Leigh Fletcher. Campbell Jones and Ash Fisher were the only multiple goal kickers for the Rovers, with two each.

All teams have this Saturday off due to the Queens Birthday long weekend before the Seniors and Reserves travel to Essendon to take on PEGS FC (Old Essendon).