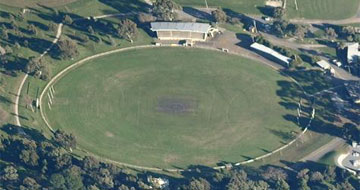 Hampton Rovers take on Mazenod at Central Reserve on Saturday in Round six of the VAFA season. Meanwhile, the Under 19s play St Bedes Mentone at Boss James Reserve from 2pm.

At selection last night, coach Russell Barnes mentioned there had been some 45 players run out for the Seniors so far in 2012. This week there are a further nine changes since last weeks match against Marcellin. Kyal McNeil makes his senior debut for the club.

The seniors get underway at 2:00pm with the Reserves at 11:40am. Its a good opportunity for the Rovers with Mazenod winning just the one game so far in 2012. Please get along and show your support for the boys as they look for that first win. Central Reserve is located on Springvale Road near the corner of Waverley Road in Glen Waverley (oval on the left).

If cant get along to Central Reserve, then make sure you get down to Boss James Reserve where the Under 19s play their first stand-alone  home game, taking on local rivals St Bedes Mentone from 2pm. The U19s are rising in confidence after kicking their highest score of the season last week. If youre able to help out as a goal umpire or other official, thatd be much appreciated!