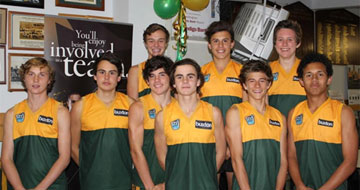 The SMJFL U14 & U15 Interleague teams were announced this week with eight Hampton Rovers players selected which is an outstanding effort.

Almost 100 kids were invited to try out for two teams, which would represent the South Metro Junior Football League team competing in the 2012 Metropolitan Interleague Championships.

The boys have been vigorously training since early March, fitting this in with other commitments including club and school football and even the occasion bit of school homework. It is a credit to them all particularly the way they have represented themselves and Hampton Rovers to the highest level.

Making the U15 Div1 team are Connor Riley, Nicholas Pavlou and Lachlan McPherson. Harry Hill, Christian Carnavale, Jamie Stynes, Guy McPherson and Matt Evans have been selected for the Div2 team. Whilst Zac Donald was not selected he must be commended for making the squad and in typical fashion his effort has been outstanding. Meanwhile Willem Hooy was selected for the U14 Div2 team.

All at Hampton Rovers wish the boys the best of luck in the upcoming carnival and we watch with interest in their future development.