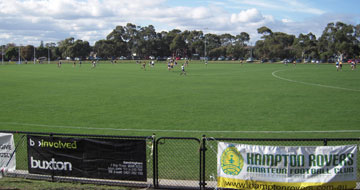 Hampton Rovers officially opened Boss James Reserve on Saturday and despite now being one of the best surfaces in the VAFA, it couldnt help the Rovers as they suffered another hefty defeat, this time to the undefeated Old Camberwell.

The day got away to a great start for the club with 100 people in attendance at the pre-game Luncheon to mark the opening of Boss James Reserve. A number of special guests were in attendance to mark the occasion. The ground was then officially opened just prior to the seniors game with Sue Anderson having the honour of cutting the ribbon.

It was perfect conditions and the resurfaced ground was in immaculate condition for the first home game of the 2012 season. The Rovers, who have struggled since a number of key departures over the off-season, fielded another young and somewhat inexperienced side and faced a tough task taking on the ladder-leaders Old Camberwell who are yet to drop a game.

As with last weeks game, Hampton could again only manage two goals for the game with Jack Sperring and Charles Kelso the goal kickers. The Rovers tried hard but battled with poor ball handling and it was obvious the boys were low on confidence.

Old Camberwell showed why they were the team to beat in C Section as they played a great brand of footy and went on a rampage, booting 29 goals and 51 scoring shots in total. The 179-point defeat was one of the biggest for the Rovers at Boss James Reserve and the boys must re-group for next weeks home game against fellow-relegated side Marcellin.

Leigh Fletcher showed his class time and time again and was best on ground for the Rovers. He was supported by Adam Power, Jack Sperring and Ed Turner.

To view a full match replay of the game, click here >>

As mentioned above, the Rovers are back at home this coming Saturday when they host Marcellin. All Rovers supporters are encouraged to continue their support and get along to the game. A special Future Stars Luncheon will be held prior to the game. More details will be posted on the website during the week but you can book early here.