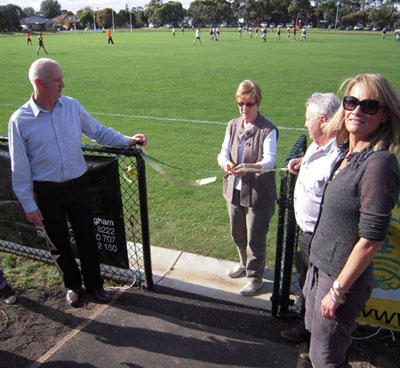 Boss James Reserve was officially opened on Saturday following a six month resurfacing of the ground with Sue Anderson cutting the ribbon to mark the return of footy to the home of the Hampton Rovers Football Club.

Hampton Rovers had played the opening three games of the 2012 VAFA season away from home and Saturdays Round 4 clash against Old Camberwell was the first home game of the season, with a triple-header including the Under 19s also.

A special luncheon was held prior to the Seniors game to mark the occasion and it was fully booked with 100 people in attendance which included representatives from the Bayside City Council, VAFA, club sponsors, Hampton CC and of course many people from the junior and senior section of the club.

Unfortunately on the field, the Rovers are struggling this year, suffering three heavy defeats. The spirit remains high around the club though, and that was evident Saturday evening with the Back to the Boss Cocktail Party attracting a solid attendance.

The resurfacing of Boss James Reserve was announced by the Bayside City Council late last year and work got underway shortly after the conclusion of the 2011 season, in early November. The old turf, which had deteriorated over the past decade, was ripped up. The ground was laser-levelled, new drainage and irrigation installed and rolls of turf laid.

To finish off the project, a new fence, coachs boxes and goal posts were installed. The new turf was given almost 12 weeks to settle and looked magnificent for the opening on Saturday, with nothing but praise from the players. In addition to this, new cricket nets were completed in October last year, with the overall project coming in at almost $1 million.

The resurfacing has ensured Boss James Reserve remains as one of the leading grounds in the Bayside area and certainly one of the best surfaces in the VAFA.

There are further plans to develop the oval with the club planning to construct new terracing in front of the pavilion to improve viewing for spectators. This project will be funded completely by the two co-tenants of the ground. The club is also keen to install an electronic scoreboard at some point in the future.

Hampton Rovers Football Club would like to thank everyone who has been involved in this massive project with a special thanks to the Bayside City Council.

Photos of the project are available on the Hampton Rovers Facebook Page.