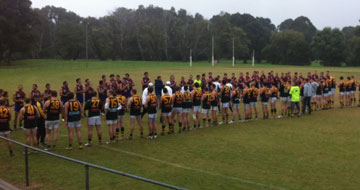 It was a dirty day for Hampton Rovers on Saturday, with a heavy defeat at the hands of Banyule. Full attention now turns to the opening home game of the season this Saturday at the re-surfaced Boss James Reserve.

It was umpires appreciation round across all leagues including the AFL and VAFA, and players from both sides formed a guard of honour to welcome the men and women in white onto the ground.

In cold and wet conditions at Heidelberg, the Rovers struggled all day with nothing going their way, despite possibly having their strongest side on the paper for the year to date.

The Rovers went scoreless in the opening term and only managed two goals for the entire game, kicked by Ash Fisher and Cam Sharp. Leigh Fletcher was the Rovers best by some distance with Sharp who came in for his first game of the year also putting in a good performed. Final score 2.7.19 to Banyule 19.24.138. View full results. Rovers fans probably dont want to watch the full match replay, so dont click here.

Following three consecutive away games to commence the 2012 season, the Rovers now finally look forward to a game at home with the re-opening of Boss James Reserve this Saturday. The re-surfaced ground looks in magnificent condition and a big crowd is expected to watch the Round 4 clash against Old Camberwell. Its a relief to finally play in front of the Rovers faithful and the boys will definitely be looking for a much improved performance.

Its a huge day for the club with a triple-header featuring the Under 19, Reserves and Seniors, a big luncheon to celebrate the official re-opening of the ground and the first senior function of the year to finish the night  the Back to the Boss Cocktail Party! Keep an eye on hamptonrovers.com.au throughout the week for all the build-up.