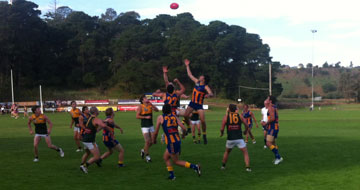 It was a tough start to the 2012 season for the Rovers, going down to an impressive Rupertswood side by 121 points at Sunbury.

It was always going to be interesting to see how the new-look Rovers side performed following the change in personnel over the off-season. Hamptons side on Saturday featured 11 players making their senior debut for the club and 12 players aged 21 or younger.

The Rovers suffered two early blows in the first quarter losing Atkins and Pirrie to injury. Rupo kicked the first three majors of the game before Sam Clements kicked the Rovers first. At the first break, the home side held a 24 point advantage.

The lead grew for Rupertswood throughout the game with the Rovers unable to keep up with the oppositions pace and superior skills. The Rovers never gave up though and battled all day, finishing with eight goals. Rupertswood full-forward Leigh Brennan had a field day, booting ten majors. The only multiple goal-kicker for the Rovers was Clements with two. Jackson Ward, Leigh Fletcher, Tom Youl and Harvey Scholes played well for the green n gold.

Next week the Rovers face Monash Blues at Clayton and will be looking for an improved performance.

The Reserves also found the going tough with a comprehensive defeat. Mark Short and Matthew Gray kicked the goals for the Rovers with Nathan Foster, Lachlan Wheeler and Jack Massie best.

The Under 19s put in a good performance against Beaumaris but after holding an early lead and all square at three-quarter time, went down by 17 points to Beaumaris at Banksia Reserve. Plenty of positives to come from the game though. Mario Papotto kicked two goals for the Rovers while best players included Lachie DeLisle, Tim Jones, Jay Dillon and Bryce Pewtress.