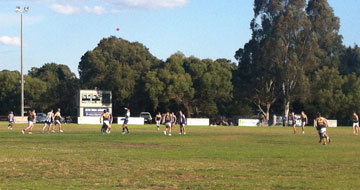 The Rovers played their final practice game against Oakleigh on Saturday and while they put in a great effort they were undermanned towards the end going down by 43pts.

It was warm conditions at Scammell Reserve and the ground was in average condition. The Rovers started with a full complement but by the end of the game were struggling with only 15 fit players with a number of players succumbing to mostly minor injuries.

The home side maintained a comfortable advantage on the scoreboard for the majority of the game: 19, 19 & 37pts at the three breaks with the final score Hampton Rovers 13.5.83 to Oakleigh 18.12.126.

It was a good effort by the young Rovers side against a team in a higher division and there were many positives to take from the final practice hit-out.

In the Reserves, the Rovers were down by 33 points at the main break and went down by 49 points at the final siren. While the Under 19s battled hard but were defeated by stronger opposition.

The 2012 VAFA season kicks-off this Saturday with the Rovers making the long trek to Sunbury to take on Rupertswood. The Under 19s open their campaign against Beaumaris away at Banksia Reserve. Full fixtures are now available.

Senior Jumper Presentation Night will be held this Thursday at Boss James Reserve. The Bar will be open from 7:30pm with formalities getting underway shortly after. All players, family and supporters are welcome along to help launch the new season. Full details here