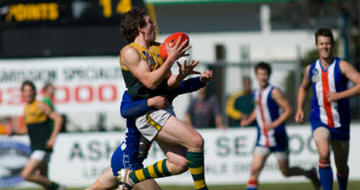 All three Hampton Rovers senior teams take on Oakleigh Krushers at Scammell Reserve this Saturday in the final practice matches before the 2012 VAFA season kicks-off next weekend.

The Rovers have played Ormond and St Pauls and this week are looking forward to another good hit-out against the VAFA B Section side. Both clubs have enjoyed a healthy rivalry in recent years and 2012 is the first time the Krushers are in a higher division than the Rovers so this will be the only meeting between the two sides this year.

The Under 19s get underway at 9:30am, followed by the Reserves at 11:40am and the Seniors at 2:00pm. Players please be at the ground at least one hour prior to your game and have white shorts.

All supporters are welcome along to WA Scammell Reserve (North Road, Oakleigh) to support the Rovers in this final practice hit-out.

Next Saturday the Rovers open the 2012 VAFA season against Rupertswood at Sunbury while the Under 19s open their season away at Beaumaris.