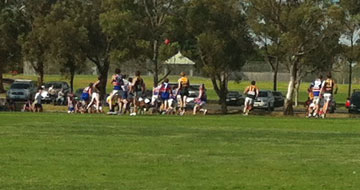 All Hampton Rovers teams were in action over the weekend for a series of practice matches. On Saturday the Seniors had a tough assignment taking on SFL premiers St Pauls.

The Seniors, Reserves & Under 19s which featured some U17 players took on St Pauls at Mentone Grammar Playing Fields in Keysborough on Saturday. Senior coach Russell Barnes knew it would be a tough hit-out against good opposition, especially with the Rovers fielding a youthful side and missing some experienced heads including Leigh Fletcher who sat-out ahead of the VAFA Rep game on Sunday.

The Seniors started well against the 2011 SFL Div 1 premiers, kicking the opening goal of the game through Ed Turner. They kept up with the opposition for the second half however the more experienced and bigger-bodied opponents controlled the game in the second half, recording a solid victory. The Under 19s performed well in the early game recording a good victory over St Pauls while the Reserves struggled.

No games this weekend with the Easter break however training continues Tuesdays & Thursdays 6pm at Castlefield Reserve, Ludstone St. New temporary lights have now been installed at the ground to meet our training requirements. Saturday-week the three teams take on Oakleigh at Scammell Reserve in the final practice match before the 2012 VAFA season kicks-off.

On Sunday all the junior teams were in action against Beaumaris. Games were played at Oak Street, Castlefield Reserve and Beaumaris High School.  Good effort by all teams and the season is not too far away, kicking-off on Sunday 15th April after the Easter break.

Also on Sunday, Hampton Rovers captain Leigh Fletcher played in the VAFA C-D4 Representative side against the Eastern Football League at Bayswater Oval. Leigh kicked a goal and was named in the best players in the VAFAs 17 point loss. In the A/B Grade game, the VAFA defeated the EFL by 12 points.