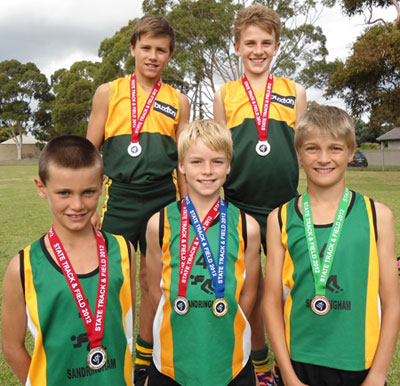 To qualify to compete in any event at a State Championships is a terrific achievement, but when 5 members of our football club all travel to the State Titles and all five win medals then that is beyond belief.

Last Weekend 70 athletes from Sandringham Little athletics club travelled to Bendigo to test themselves against the best athletes in Victoria, 41 medals were won by the LAS with many PBs and two State Records  by one of the under 11 Girls.

Five Hampton Rover players were among the best that the state has to offer and all five reached well within themselves to produce personal bests, this didnt come by accident but hard work as all 5 ROVERS have had big summer months working hard on their chosen events.

Miles Bergman left nothing on the track in the under 10 boys, he won his second state title in two years in the triple jump (9.30 meters) and backed it up with second in the Long Jump (4.23), his power and style was there for all see in the 200 and 400 as his never say die attitude placed him 6th and 4th respectively, Miles always shows maturity beyond his years and is an excellent role model and leader of his peers. His story has only just begun, watch this space!!! AWESOME WORK MILES.

Sebastian Williams, Under 13, true to his style was never going to die wondering in the 1500m, he left himself plenty of work to do with 600meter to go and was 60 meters from the front, in what I will remember for a very long time, I saw desire like I had not seen in many years, Seb ran the pack down passing opposition at will,  his attack at all cost mentality saw him hit the lead with 110 meters to go with a stressful Sandy crowd screaming for Seb to write the final chapter, it wasnt to be and Seb got SILVER, but won the play of the day in the hearts and minds that witnessed his efforts. PURE CLASS SEB!!!

Finn Campigli, Under 12, had trained to the minute and dreamt of that golden moment that no doubt will be his, Finns fluent action and grace on the track is wonderful to see and be a part of when you see his work effort on the track and around the club, his constant word of encouragement to the younger athletes is first rate and his final performance was worthy of the top step, however his story ended with a SILVER MEDAL and a huge smile from a GREAT YOUNG GUY!! His time of 1.00.22 was a PB. Keep up the great work Finn, the magic minute WILL FALL !! I look forward to seeing your trusty Left foot hit plenty of targets this footy season..

Felix Flockart, Under 10, is one adaptable young sportsman, his summer months are filled with nothing but sport, his biggest dilemma is what sport to do and excel at, but to his disappointment  there are only 24 hours in the day. Cricket, Nippers, Basketball, Surfing and yes athletics, Felix travelled to Bendigo with the memory of last years Bronze medal state performance in mind, his PB was 1.40m and his form in training was HOT! The crowd of over 300 stood in awe as Felix took centre stage and leapt into the final three athletes to secure the BRONZE with his final attempt of 1.38m which under extreme pressure was wonderful to see. SUPER STUFF FLICKA!!

The youngest of the five is Lachlan Carrigan, Under 9 , Lachlan similar to Felix has had a massive summer of sport and won GOLD at the State Multi Athletics (pentathlon) event in November at the brand new Lake side track, he had trained very hard throughout February and March for States and was very optimistic (yet nervous) about what lay ahead. As this was his first state titles he was amazed at the level of competition and he soon found out that they dont just hand state medals out.

He finished a very close 4th in the 200 meters final on the Saturday and 7th in the long Jump final but left his best to last on the Sunday by running 2 PBs for the 400 heat and then final and claimed the SILVER medal in a time of 1.10.50 minutes. It was late in the afternoon and the crowd was in full voice as the young chargers swept around the bend and into the final straight, he dug deep and threw himself across the line, Thank god he got his mothers wheels!! VERY PROUD OF YOU LOCKIE!!

We at the ROVERS are very proud of all our players and these five are no exception, well done boys!!

The five ROVER players take plenty from Little athletics over summer and it is through this that our club has sparked a strategic alliance with Sandringham athletics club and will employ a professional coach to work with all Rovers players on Monday nights throughout the season, Nick Bowden will be working on postgame rehab, via stretching, looking at motor skills and running technique & working on stamina, agility and speed, it is through this that we expect great results short and long term with our development of individuals and as an overall club.

Through this approach it is expected that more Rovers players will join little aths in the ensuing years and join the five mentioned athletes on their own road to State & possible National glory!!