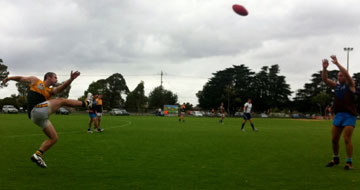 The Hampton Rovers Seniors and Reserves defeated Ormond in the opening practice games of 2012 on Saturday at Keysborough Reserve. The playing surface was in superb condition for the match.

It was a youthful Rovers outfit across both sides, with a number of departures over the off-season giving the opportunity to fresh faces and new recruits to the club. The Seniors features several players with Sandringham Dragons experience, many of whom were playing their first senior game for the club.

They gelled well with the more experienced players out on the ground and played some exciting football to give the supporters of the green n gold plenty of optimism about the season ahead. The Rovers kicked the first goal in the opening minute and remained in control for the bulk of the game.

While official scores werent kept, the Seniors got up by about five goals and the Reserves by about three goals. It was a good first-up hit out for the boys as the 2012 VAFA season fast approaches.

Training continues this week on Tuesday and Thursday 6pm at Castlefield Reserve, Ludstone St Hampton. Everyone is welcome along, especially those players who havent had a chance to get down to training at this stage and as always, new players are welcome down for a run.

This Saturday the Rovers take on SFL Div 1 Premiers St Pauls at Mentone Grammar Playing Fields (Oval 3), Springvale Rd Keysborough. The Reserves commence at 12 midday with the Seniors at 2pm. The U19s will combine with the Rovers U17s to take on St Pauls U18s first up at 10am. All supporters are encouraged to get along and support the boys.