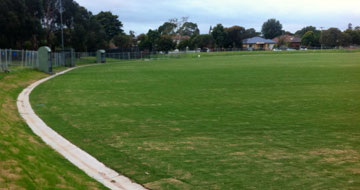 Over the off-season, the main home ground of the Hampton Rovers Football Club has undergone a major transformation, at a cost of $800,000, funded by the Bayside City Council.

Turf, irrigation & drainage have been replaced while the ground has also been levelled by laser to be almost completely flat. A new boundary fence will be installed before the project is complete.

The final section of turf was laid a few weeks ago and there is still approximately two months until the ground will be ready for use, allowing plenty of time for the turf to settle in.

Once complete, Hampton Rovers Football Club will boast the best playing surface in the Bayside area. The club has further plans for the future development of the facility including the area in front of the club rooms.

Due to the works, the Seniors are scheduled to play their opening three games of the season away from home with the Round 4 clash against Old Camberwell on May 12 to formally re-open the ground. Boss James Reserve will have limited traffic throughout the season to preserve the turf with more matches and trainings than usual scheduled at alternate venues.

For information on playing on the new surface at the Hampton Rovers Football Club in 2012  click here!