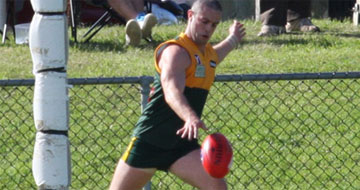 Leigh Fletcher has been announced as 2012 senior captain of the Hampton Rovers with Ed Turner vice-captain.

In what is a fresh new start for the Rovers in 2012 with a predominantly young side, Leigh and Ed are the perfect players to lead the side as they take on VAFA premier C section.

Leigh Fletcher played his junior footy with East Sandringham before joining Hampton Rovers as part of the Sandy Rovers merged side in 2000. Following a stint at Sandringham VFL, he returned to the Rovers in 2007 and has been an outstanding contributor since, highlighted by winning the previous three senior best & fairests and the 2010 VAFA B section league best & fairest. Leigh has played 139 games for the Rovers including 114 VAFA games. He takes over the main job in 2012 from Gary Carr.

Ed Turner is in the younger group of players, having played all his junior footy at the club, he was best afield in the 2009 U19 premiership side. He made his debut for the Rovers in 1999 and his 208 club games include 53 in the VAFA. Ed has done pre-season training with Port Melbourne VFL on several occasions but is dedicated solely to the Rovers this season.

Both players spoke of their delight and honour in leading the Hampton Rovers in 2012 when announced at the season launch on Sunday.

Leigh and Ed, as well as Josh Verlin, have also been selected in the initial training squad for the VAFA C-D4 representative side to take on the Eastern Football League in April.

Rovers Pre-Season training continues Mondays & Wednesdays  for full details including session times  click here. All current, past and new players are welcome down as we approach the new season.