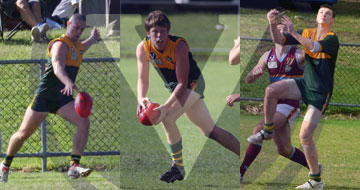 Hampton Rovers players Leigh Fletcher, Ed Turner and Josh Verlin have been selected in the VAFA C-D4 representative squad to take on the EFL in April.

Coach Dean Matthew has named a strong initial training squad which includes players from 28 clubs in total. The final team will take on the Eastern Football League on Sunday 1st April at Bayswater.

The Rovers have always been strong contributors to VAFA representative football and 2012 is no different.

All three players have been some of the most consistent for the Rovers over the past few seasons and their spot in the initial squad is well deserved.

Meanwhile, Rovers Pre-Season training continues Mondays, Wednesdays & most Fridays  for full details including session times  click here. All current, past and new players are welcome down as we approach the new season.