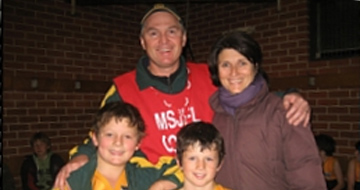 As a current director of the North Melbourne Football Club and former CEO of the Richmond Football Club, Mark brings with him a wealth of experience to the board table.

Talking about his appointment, Mark had the following to say,

Im very pleased to chair the Clubs Board and hope I can do my bit to help.  My four sons have all played for the Rovers as juniors and towards the end of this season, my eldest son played a handful of games within the seniors ranks.  Its essential that an important local institution such as the Rovers is well governed and administered, in order for it to continue to provide young men with a chance to play the greatest game in the country.

I dont expect to be a very prominent Chairman, however, I do hope to make a small contribution largely behind the scenes, assisting to ensure the Rovers remains a well respected, progressive and inclusive institution.  Thanks for allowing me to chair the Board … and Go Rovers!

Mark played 32 games for North Melbourne between 1990 & 1992 and began his career at Claremont in the WAFL. As well as his current involvement at North Melbourne and past involvement at Richmond, he was also an employee at Port Adelaide and Fremantle. He is also a current sponsor of the Hampton Rovers Football Club through his company, ClubLINKS Security.

Both Jim Westhead (senior president) and Phil Bourke (junior president) were renominated for 2012. Full 2012 committees can be viewed here. The seniors still have a couple of positions vacant  Secretary and Sponsorship Manager  Click Here for information.