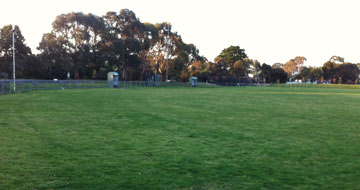 The resurfacing of Boss James Reserve is expected to get underway within the next week, with turf to be laid, meaning the Rovers will be back on the ground for the 2012 season.

It will be the first time Boss James Reserve has been completely resurfaced and the project will ensure the ground is by far and away the best in Bayside. The existing turf will be ripped up, new drainage installed, the ground levelled and new turf laid as oppose to seed planted, which will mean work should only take around six months compared to twice that if the traditional method was used.

The project, which will come in at approximately $800,000, has been planned for a long time and was confirmed at a Bayside City Council meeting earlier this month.

The David Street ground has struggled in recent years with the drought causing big problems a number of years back. The ground in general has become un-level and the quality of the surface far from ideal. Once complete, it will be in spectacular condition and provide Hampton Rovers players with the best playing surface in Bayside.

A page has been set-up to bring you updates on all the latest news, see:
2011/12 BOSS JAMES RESERVE REDEVELOPMENT >>