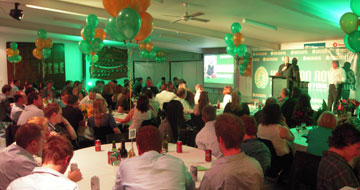 The Senior Presentation Night was held at the club this year and it was a great turn-out with the rooms full to capacity. After a disappointing season on-field this year, it was great to finish the season on a high and the atmosphere on the night once again showed how good a club the Rovers is.

Leigh finished the season on 138 votes, 31 ahead of runner-up Mark Devereaux. Daniel Corp, Jay Ting and Richard Atkins were the other senior award winners.

Adam Power took out the Dom Devola medal for the reserves best & fairest with Ben Kezilas runner-up. Steve Anderson won the Thirds, four votes ahead of Matthew Gray. While in the Under 19s, Matthew Care comfortably won the McGregor Medal, 29 votes ahead of runner-up Marlon Woltering.

The best clubman award this year was very deservedly awarded to Dean Lovig who has done a superb job in 2011 around the club.

The club thanks everyone for their attendance and is very much looking forward to 2012. Keep an eye on the Rovers website for all the latest news from the club.

– Visit the Rovers Facebook for some photos from the night.