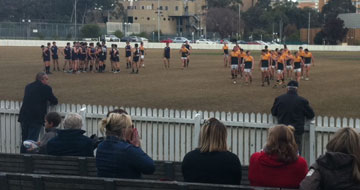 The Rovers ended their 2011 season and Premier B campaign on Saturday with a 46-point loss at the hands of Uni Blacks at Melbourne University.

With both sides having nothing but pride to play for, it was going to be an interesting affair, it would also be interesting to see how the Rovers respond after last weeks thrashing of minor Premiers Caulfield Grammarians.

In perfect football conditions, the Rovers butchered multiple opportunities with poor kicking to the forwards and kicking for goal. Coach Russell Barnes described it as the Rovers worst quarter of the year at the first break, but it could have been worse if not for two late goals to Josh Verlin, including one after the siren from the 45 metre arc on the boundary. The home side kicked four straight to hold an eight point lead.

The second quarter saw the Rovers dominate all over the ground however that failed to result in goals on the scoreboard. Both sides kicked a goal each and the Blacks held a seven point advantage at the main break.

The second half belonged to the home side as they stepped up a gear and played some impressive footy in front of their supporters. Six in the third and five in the last to the Rovers three and two saw them run out comprehensive winners.

So, after three seasons in the second highest division of the VAFA, its back to Premier C for the Hampton Rovers in 2012. Rest assured that the club isnt going back to consolidate, but will be working tirelessly to ensure its a successful season both on and off field. The recruitment committee, headed by injured veteran Anton Duddy, has already commenced planning for next season.

Stay tuned to the Rovers website for a season report where well wrap up the 2011 season on-field. Well also keep you updated with all the latest club news including the ground redevelopment.

Finish the season on a high and make sure you come along to the 2011 HRAFC Presentation Night, to be held Saturday 17th September at the club. Were expecting around 120 people on the night so please book your seat early  bookings can be made online. $50 will get you a two-course meal with drinks at Rovers Bar prices. FULL DETAILS HERE