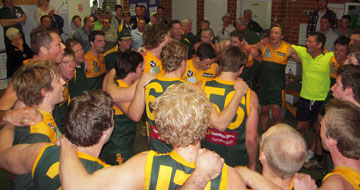 Hampton Rovers caused the upset of the season on Saturday, thrashing ladder-leaders Caulfield Grammarians by 11 goals in perfect conditions at Boss James Reserve. It was the first home win of the year for the Rovers in the second-last round of 2011.

The VAFA Premier B Round 17 clash was a dead-rubber with Caulfield Grammarians assured of the minor premiership and the Rovers destined for relegation to C section for 2012. While most knew the Rovers would give the ‘Fields a much better run for their money from the Round 2 encounter, it’s fair to say no one predicted a Rovers victory, let alone a 206-point turnaround.

It was a big day being the final Rovers home game of the season and the final game before the $750,000 resurfacing of Boss James Reserve. Over 70 people were in attendance at the President’s Luncheon and there was a big crowd on hand for the main game in sunny conditions, while there was another solid roll-up for the Premiership Reunion function later in the evening.

The Rovers went into the game minus Guy Martyn and Stuey Burggraaff (injured), Donald and Alcott while Clarke was a late omission as was Cameron Sharp who got a call-up to the Zebras. Young-guns Josh McPherson and Will Brayshaw from the Under 16’s made their senior debut, Danny Corp made a welcome return and Shem Curry got the late call-up. Ten of the Rovers 22 players were under the age of 21  a stat that is most encouraging for the future of the club. Meanwhile, Caulfield had three changes from last week’s 56-point victory over Old Ivanhoe.

Rovers coach Russell Barnes said he was not surprised by his team’s effort. “We play a different style of game they (the Fields) don’t like: never give in and hard at the footy,” Barnes said.

The Hampton players entered the ground via the social rooms to the standing applause of the lunch attendees and from the get-go, the Rovers rattled their opposition going hard at the ball and playing accountable footy. The opening goal of the game came through Danny Corp, Devereaux kicked the other while the visitors managed three to lead by five points at the first break.

The second quarter saw the Rovers begin to put their assertion on the game, kicking the first two through Fisher and Verlin. The goals continued to flow for the home side, kicking eight for the term to Caulfield’s two. The margin at the main break was 34 points and a major upset was brewing at the Boss with the minor premiers in all-sorts. The Rovers were cheered off the ground by the faithful but all were aware there was still a half of footy to go.

Barnes fired his chargers in the sheds at half time and urged them to continue mounting pressure on the opposition and go hard at the ball in the second half.

The Rovers again kicked the first two goals of the term, through McNeil and first-gamer Josh “Speedy” McPherson. Corp kicked an excellent goal from the boundary in front of the Rovers crowd to put the home side 46 points up. By this time the party tricks were coming out with the Rovers running rings around the opposition. The Rovers Twitter service was in overdrive pumping out the live scores.

Mark Devereaux and Leigh Fletcher were racking up the possessions, Josh Verlin was proving a strong option up front, Daniel Corp was dominant while Ash Fisher was also getting in on the act with all three kicking three goals each. Gary Carr was reliable as always down back while Ed Turner weaved his way around the opposition with multiple baulks. Josh McPherson’s speed was super-impressive as he ran away from opposition players with ease while the other youngster Will Brayshaw also played an excellent game in his senior debut.

The Rovers held a 46-point lead at the final break and the final term played out the same as the previous three with the Rovers well and truly controlling the game. Turned kicked the first, another three followed and even Jesse Lovig snuck up from the back-line, dodged the opposition and kicked a major to put the Rovers 76 points up. A late Caulfield goal brought the margin back to 69 points as the final siren blew.

It was an outstanding performance by the Rovers with every player contributing. For Caulfield, it was their heaviest defeat of the season with one game remaining before finals. While the Rovers know they will be playing C grade in 2012, the signs are positive for the future and preparations are already underway to ensure next year is a successful one on-field and a return to Premier B is a quick one.

This Saturday the Rovers play their final game of the year, taking on seventh-placed University Blacks at Melbourne University. All Rovers supporters are encouraged to get along and support the boys in their final outing for the season. All supporters are also welcome down to the club for the final Thursday training and selection night of the year.