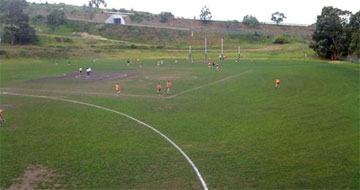 The Rovers will be looking to atone for their disappointing result last week against Marcellin after several weeks of improved performances. Last time the two teams met at the Snakepit, the Rovers fell just short, going down by five points in a thriller.

Get along and show your support for the boys as they go for the win. St Bernards College is located on Hampton Road in West Essendon  enter via Gate 8 (oval is situated at the bottom of the driveway on the left-side of the club rooms). Melways ref: 27 J3.

Seniors commence at 2:00pm with the Reserves at 11:40am. Live scores available via Twitter: @HRAFC

Congratulations to Stuart Burggraaff who plays his 200th club game for the Rovers on Saturday. Stuey joined the Rovers in 2000 from East Sandringham, playing a season in the U17s before moving up to the U19s the following season. He is a consistent performer in the seniors and has played 185 games in the VAFA including 15 games this year.

The Under 19s play their final game of the season, taking on Collegians at Boss James Reserve at 2:00pm. If youre unable to make it to Essendon, get down to the Boss and cheer on the boys!

After the days play, get back to Boss James Reserve where the Bar will be open and match awards presented.

·         Next week is the final home game of the season, against Caulfield at Boss James Reserve. Book in early for the Presidents Luncheon  Click Here to book online now or contact Jenny Voss on 0411 773 511. Lets make it another big one!