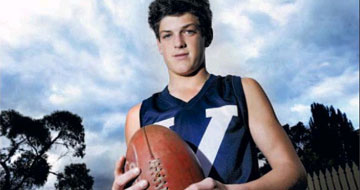 Following on from his excellent performance in the Metropolitan series. Angus was selected for the Victorian Secondary School Under 15 team which played in the National Carnival. Not only did Victoria win the championship, but Angus was selected in the All Australian Team, which travels to South Africa later this year to play a series of international games.

This is a tremendous achievement, and the Rovers family congratulates Angus on this outstanding effort.