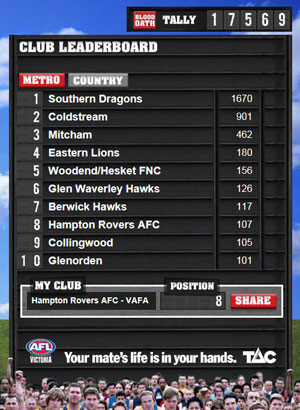 Hampton Rovers Football Club finished eighth in the recent TAC Blood Oath campaign, the highest of any VAFA and MSJFL club. The club was active in spreading the message to reduce road trauma amongst young men.

Blood Oath was a joint campaign between the TAC and AFL Victoria to prevent young people from being killed or seriously injured in road trauma.

Fronted by twin AFL senior coaches, Brad and Chris Scott, My Blood Oath reminds young men that Your mates life is in your hands and pushes the road safety message through Victorian football clubs at all levels.

Players were able to take an oath via Facebook to show their friends and family they are serious about putting an end to road trauma.

The Hampton Rovers had 107 people take an oath and while that was a long way off the eventual metro winners, Southern Dragons Football Club with 1670 oaths, it was still a great effort to finish on the top ten leaderboard, once again displaying the clubs commitment to great causes. The Rovers were the only VAFA or MSJFL club to finish in the top ten.

The Blood Oath team visited a Hampton Rovers training session a couple of Thursdays ago to promote the campaign. Read about that night and view photos here.

Your mates life is in your hands.