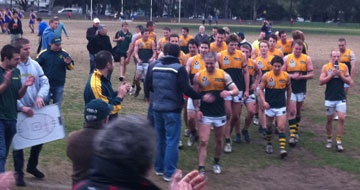 The Hampton Rovers won their first game of the 2011 season on Saturday, with a convincing 31-point victory over local rivals Beaumaris at Banksia Reserve. It was a clean sweep with the Reserves also notching up their maiden win of the year.

Following a horrid run with injuries earlier in the year and several key departures, its unfortunately taken until the closing stages of the 2011 season for the Rovers to field their best possible side. The past few weeks the boys have improved out of sight every game  pushing the form side Old Brighton, just losing to fourth-placed Oakleigh by four points, and finally the first victory of twenty-eleven.

Guy Martyn came in for his first game of the season after being dogged by injury all year, he was joined by Alex Ross and first-gamers Ben Clarke and Josh Pavlou.

The Rovers dominated play from the outset and it was Martyn who slotted the first goal of the game  his first of six in a best-on-ground performance. Rovers kicked a further four for the term to the Sharks one to lead by 25 points at quarter time.

Hampton were playing with confidence, with Matt Terech winning the ruck, Fletcher and co controlling the midfield and Corp, Verlin and Martyn dominant up front. Although its unfair to pick just those players out as really everyone in the green and gold was contributing.

The home side responded in the second term with a much improved performance.  Three late goals, including two gifted from questionable decisions, gave them six for the quarter to the Rovers three, to reduce the margin to just five points at the main break. The highlight for the Rovers was a screamer taken by Josh Verlin in the forward pocket, but unfortunately his radar was off, missing a few opportunities at goal.

Rovers coach Russell Barnes was disappointed with the effort in the second term and he fired up his troops. Beaumaris kicked the opening goal of the third term to hit the lead for the first and only time of the game. From then on it was all Rovers as they controlled the contest.

Martyn and Verlin kicked the next two, and the goals kept coming for the Rovers, kicking six for the term to hold what looked like a match winning lead of 30 points at the final break. Mark Devereaux kicked the all-important opening goal of the final term with a great running effort from the 45 metre line. Jesse Donald snuck a couple as the Rovers defence held firm at the other end of the ground with Gary Carr once again dominant.

In a massive relief to players, coaches, supporters and everyone else involved, the final siren blew, confirming the Rovers first win of the year, defeating local rivals Beaumaris by 31 points and denting their finals aspirations in the process. The song was sung the loudest it has been in quite some time with everyone overjoyed by the result.

Despite relegation to Premier C for 2012 all but guaranteed, the Rovers have nothing to lose and will fight for as many scalps as possible to finish off the season.

The Reserves also played an outstanding game and got up for their first win of the year, defeating Beaumaris by 43 points. The club song echoed throughout the pavilion, pausing the luncheon taking place inside the social rooms, and pumping up the senior side that remained in the rooms during the song before running out onto the ground. Ash Fisher was clearly best for the Rovers, kicking six goals. Liam Woodland and Adam Power kicked three each. Nick Hoban, Harvey Scholes and Tom Mitchell were also amongst the best.

It was fantastic to see so many players and supporters back at Boss James Reserve following the game, with awards handout out at around 7pm. This will be repeated for all remaining away games this year.

Also on Saturday, the Thirds played their final game of the season, going down to second-placed Hawthorn. Playing-coach Michael Flahive, who played his 200th club game for the Rovers on Saturday, alluded to the fact that over 60 players have played a game in the threes throughout their 13-game season. It was also noted by several people that despite the loss, everyone enjoyed themselves, as has been the case all year and thats what the Thirds are all about. Looking forward to 2012!

Click Here to view full results from Saturday’s four Rovers games.
This week, the Hampton Rovers take on Marcellin at Boss James Reserve.
Click Here to book your spot at the penultimate President’s Luncheon of 2011!