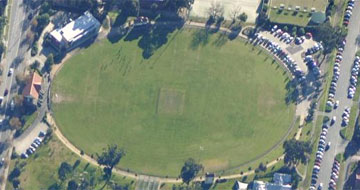 The Rovers put their best team of the season on the field on Saturday and put in their best performance of the year, but came up just short, going down by four points to Oakleigh at Warrawee Park.

The game was moved from Oakleighs normal home ground, WA Scammell Reserve, to the former Oakleigh VFA ground on Warrigal Road to celebrate community football and honour a club legend that passed away recently. It was the first game of senior football at the venue in a long while, with the only tenant of the ground the Oakleigh Chargers U18 TAC Cup side.

Leigh Fletcher and Ned Fallon came into the side for the round 13 clash. In all, the Rovers team included no less than eight players aged 21 or under, including Sandringham Dragons players Cameron Sharp, Jack Wilson and Ned Fallon who was returning from injury.

It was perfect conditions for footy with little breeze and the ground in top condition albeit for a muddy centre. It was a tight contest from the outset and it was Oakleigh who took an early lead up three goals to one, but two late majors to the Rovers had the margin at just a few points at the quarter time.

The Rovers controlled the second term kicking six goals to three. The boys were playing their best footy of the year against a physical Oakleigh Krushers outfit. At the main break, the margin was nine points in favour of the green and gold. Also evident was the Rovers accurate kicking, booting nine goals one in the first half.

There was a positive vibe in the rooms during the main break and things looked rosy. However the third term was anything but, as the boys lost their mojo and the home side racked up a seven goal to nil quarter, blowing the margin out to 35 points. And didnt the Krushers supporters enjoy it, the noise coming from the outer hill in front of the RSL beer garden was something else.

The Rovers were not out of the contest, but they certainly had it all to do. Coach Russell Barnes issued his chargers with some personal challenges which would give the team a chance. And the boys responded.

With Matt Terech and Jack Wilson sharing the ruck duties, the Rovers were winning the footy out of the centre and with Cameron Sharp, Jay Ting, Mark Devereaux and Stuey Burggraaff winning more of the ball, things started to improve. Daniel Corp kicked the opening two goals of the final term, and the scoring continued with further goals to the visitors. The Rovers were playing all over their opponents with everyone contributing.

An Oakleigh goal late in the game, their only for the quarter, relieved some of the pressure the Rovers were applying, however they kept pushing, and a goal to Ned Fallon reduced the margin again to just four points. Unfortunately for the Rovers the final siren blew, resulting in a four point loss. Its probably safe to say most in attendance knew another minute would have seen a Rovers victory, but footy can be a cruel game.

Still there were plenty of positives to take out of the game and the Rovers performance had again improved from the week prior, as has been the case for the past few games. The score of 15.7 was the Rovers highest of the season and we kicked the most goals of any B section side on Saturday. The boys are dying for a victory and hopefully another improved performance in next weeks  local derby against arch-rivals Beaumaris at Banksia Reserve results in the first win of the year.