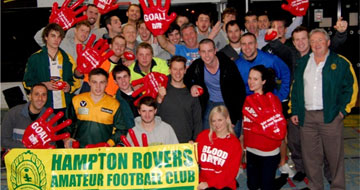 You have probably seen the TV commercials with Brad and Chris Scott talking about looking after your mates, particularly when it comes to driving your car. Blood Oath is an initiative between the TAC and AFL Victoria designed to prevent young people, particularly males aged 18-25, from being killed or seriously injured in car accidents. It highlights the road safety message: Your mates life is in your hands.

TAKE AN OATH TODAY! SEE THE BOTTOM OF THIS ARTICLE FOR SIMPLE INSTRUCTIONS ON HOW TO REGISTER ON FACEBOOK!

The statistics are quite disturbing when it comes to road trauma. In the past 12 month more than 75 young people aged 18-25 have been killed on Victorian roads. That is the equivalent of three footy teams wiped out. An additional 1,000 have been seriously injured. The major factors in crashes involving young people are inexperience, deliberate risk taking and overconfidence. Male fatalities increased to 220 in 2010 from 196 in 2009. In short, about 10 country footy teams worth of men were killed last year because of road trauma.

The sad reality is that our club has been touched by road tragedy, when two of our under 19 players were tragically killed in a car accident several years back. Following this Hampton Rovers inaugurated an award, named after one of the boys who passed away. The Mark Johannsen Memorial Award is in memory of Mark and is awarded to the best team player in the under 19s each year.

Last Thursday evening, the Blood Oath team came to the Hampton Rovers Football Club and addressed the senior and under 19 playing group about the campaign and what the Blood Oath message is all about. Whilst a bit of fun was had, the message was loud and clear:

Dont drink and drive, dont take drugs and drive and most importantly LOOK AFTER YOUR MATES!

It was great to see so many of the players jump on board the Facebook campaign and take the Oath. Every road death is preventable and we need to do everything within our powers to get the message through. Click Here to see photos from the night!

So the Blood Oath campaign comes as a timely reminder to us all.

It is important that we continue to spread the word and increase the awareness of the message but also there are opportunities to win prizes. Over the course of the month of July, players can visit www.facebook.com/MyBloodOath, take an Oath to drive safely, enter Hampton Rovers AFC as their club, and post their Oath to their own Facebook page. Each week a club who has taken the Oath, will be randomly selected to win one of 4 x $5,000 prizes and 1 x double pass to the 2011 AFL Grand Final for the individual Oath-taker. In addition to this, the club who registers the most Oaths will win $30,000.

There are only two weeks to go as the competition closes 31st July, so we are calling on all club members to go to the Facebook site and take the Oath and help win money for the club.

The aim is for Hampton Rovers to register the most Oaths of all entries!

We encourage all players, members, supporters and their friends to take an Oath and commit to safer driving.

HOW TO TAKE THE OATH AND ENTER THE DRAW TO WIN AWESOME PRIZES:

1. Go to: www.facebook.com/MyBloodOath
2. Make sure you are logged in to Facebook
3. Click the Like button at the top of the page
4. Click the big red heading TAKE THE OATH  if this page doesnt appear, you may need to click Take the Oath from the menu on the left-side
5. Facebook may Request for Permission to access your basic details  click the Allow button
6. Enter your details, enter the club as: Hampton Rovers AFC  VAFA (make sure you select -VAFA from the list, and not -MSJFL, otherwise this will halve our chances of winning the major prize)
7. Click the box to accept the terms & conditions, then Take the Oath. All done!
8. Now click the Spead the Word button and type a message to post it onto your own Facebook wall and promote it to your mates.