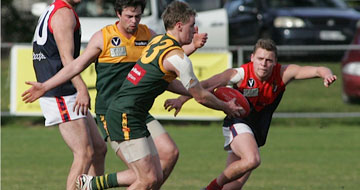 The Hampton Rovers put in their best performance of the season on Saturday but still couldnt come away with the points, going down to in-form Old Brighton by 31 points.

In blustery conditions at Boss James Reserve, the Rovers played all over their higher-placed opponents, leading by 19 points at quarter time and five points at the main break. However the home side failed to take full advantage of the wind in the third term and trailed by two points at three-quarter time.

A four-goal burst early in the final term to the visitors saw them take control of the game and they finished with a six goal to two quarter to win the game by 31 points. With a number of players back from injury, its a platform to build on for the remainder of the 2011 season with plenty of positives taken from the game.

Following the match, Rovers coach Russell Barnes said we were good today, but again, not good enough. The Rovers supporters could feel a change in the boys attitude right from the first bounce. We were hard at the ball, the tempo was upbeat and we were delivering forward accurately, putting scoreboard pressure on the opposition.

Big Matty Terech was deservedly named BOG at the after-match awards. Using his strength and speed in a controlled manner, he had many opposition players looking sideways. He kicked one of the goals of the day as he crashed through a clearance, picked up the ball, accelerated and with great nonchalance slotted a needed goal. Captain Gary Carr was general down back as always, while Tinger was his usual self, weaving his way around the opposition and he  certainly owned his wing for most of the day and time and time again was the link through the centre.

Our youngsters came to the fore. Cam Sharp, Alex Woltering and big Jack Wilson all had influence on the game at various times. Great to see these young players step up and show the skills learned with their time at the Sandringham Dragons. Guy Martyn was a late withdrawal and was replaced by Alex Whalebone who also played in the 9:30am game with the Under 19s.

Up forward the goals were being spread around. Zac Alcott with 3, Cracker with 2 and Cam Sharp with 2. With Josh Verlin offering the target, it was up to our crumbers to take advantage of the opportunities presented and they did.

A big turn up for lunch and those present were able to hear Dylan Alcott, yes, Zacs brother, tell us about his sporting life including a world ranking as number 4 as a wheelchair tennis player and then
in China at the Olympics achieving the ultimate – a gold medal in Wheelchair Basketball  a truly inspirational story and we even got to touch his Gold Medal. Thanks to Dylan for giving up his time and clearly showing his support for the Rovers. Young Angus Brayshaw was also a guest and interviewed by MC Don Scarlett on his selection in the representative U16 MSJFL team to play in Canberra in the coming weeks.

Others in attendance showing their support were the Bayside Mayor Alex Del Porto and our local Councillor  James Long. The eighty strong luncheon crowd were advised by the mayor that in 2012 the Council is investing $750,000 in upgrading the Boss James Reserve surface. He went on to say that this confirmed Councils view that the Hampton Rovers are an integral and vital part of community sport in Bayside and that we have their full support in our operations.

This week, the Rovers face arch-rivals Oakleigh  however instead of the game being played at their normal home ground WA Scammell Reserve, itll be held at Warrawee Park on Warrigal Road  the former Oakleigh VFA ground.