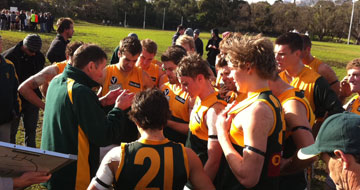 The Rovers suffered another heavy defeat on Saturday going down to second-placed St Kevins at a muddy T.H. King Oval. While the U19s won their first game of the year downing Old Ivanhoe.

At Glen Iris, St Kevins were keen to atone for the Round One draw at Boss James Reserve  the Rovers only points of the season thus far. However Hampton put up a good fight in the opening half. On a playing surface that largely resembled a cow paddock, Jesse Donald kicked the opening major of the game via a free kick directly in front of goals.

The Rovers kicked the opening goal of the second term and got within ten points of the home side, however Skobs began to take control of the game and led by 41 points at the main break.

The second half was all St Kevins as they booted 15 goals to the Rovers 3 to run out easy winners by 117 points. Josh Verlin was best for the Rovers, also the leading goal kicker with three.

It was a similar story for the Reserves who also went down to Skobs. Chris Ekberg-Weiss was the star for the Rovers though, kicking all four goals and best. The Thirds had a Bye on Saturday.

The Under 19s played their first game in the newly-created Section 3, following the planned mid-season restructure of the VAFA U19 competitions. After getting flogged in the majority of games, it was the Rovers who handed out a flogging of their own on Saturday, thrashing Old Ivanhoe by 108 points. Alex Woltering, Christian Harbour and Josh McPherson were best for the Rovers. Matt Care kicked four, Christian Harbour, Brandon Scott & Lachie Edgar kicked three each, while Josh McPherson & Daniel Colasacco kicked two each.

Click Here to view full results and match details from the weekend.

This Saturday, the Rovers return to Boss James Reserve for the first time in a month, taking on Old Ivanhoe. Get along and show your support for the green and gold. Bookings are now being taken for the pre-game Presidents Luncheon. Enjoy the full Rovers match day experience! Click here for details and to book your seat online.