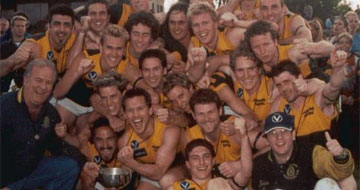 With 2011 being the 10-year reunion of the last Hampton Rovers senior premiership, a number of players who played in the flag are intending to return for a game in the thirds on July 9th.

Since the idea was originally mooted for a legends game of sorts, more players have jumped on board and some have even expressed interest in playing additional games to close out the season, assuming the hammys hold out of course.

The planned game is the Round 12 fixture against Old Geelong at Boss James Reserve, commencing at 11:40am. With the Seniors having a bye that weekend, its a great opportunity for everyone to come down for a watch, or laugh. The U19s will follow at 2pm and the Rovers $1,000 Day will follow immediately after that, going well into the night.

Some of the names already mentioned include Anderson (Doc), Holt, Busby, Shenfield, Healy, Scarlett, while Steve Ando, Power and Chief are still playing, and more are expected to join in the fun. We’ve also had it confirmed Norm Goss will return to play a part on the coaching side of things.

If youre a premiership player reading this and are interested in playing, please get in touch with one of the boys or the club. Please note VAFA registrations close at the end of June, so this must be done ASAP.