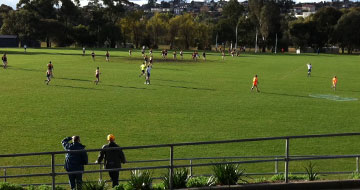 The Rovers were suffered one of their worst defeats of the season on Saturday when they were defeated by Marcellin at Bulleen.

Hampton went into the game with no less than seven changes from the previous round against Beaumaris and it clearly unsettled the side as they failed to make any impact on the game. Marcellin had also been struggling in 2011 since their relegation from A grade, but they looked slick on their home deck, which was in perfect condition for the Round 9 clash.

The Rovers could only manage two goals for the day and 12 scoring shots in total  the Rovers lowest score since 2004. One came from Stuart Burggraaff in the second term and Jesse Donald in the third. It was simply one of those days where nothing seemed to go right for the Rovers, whether it was the bounce of the ball or the decisions from the men in white.

Sandringham Dragons/Zebras player Cameron Sharp and U19s player Bryce Pewtress made their senior debuts for the Rovers while Ben Kezilas and Lee Smith came in for their first senior game of the year. The Rovers also had Jack Baxter, Jack Wilson and Matt Care who have only played a handful of senior games between them. While results may not be going the Rovers way, there are plenty of young players getting valuable game time in the seniors which is great for the future.

Next week the Rovers face second-placed St Kevins away, the only side the boys from Hampton have earned points against in 2011 following the drawn game at Boss James in Round 1. The match will be played at TH King Oval which by all reports is in average condition at present. Get along and show your support as the boys give it their all to earn their first win of the year.