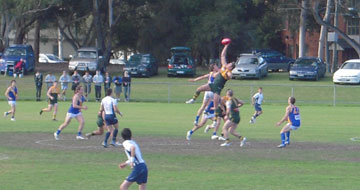 The Rovers horror run continued on Saturday as they went down to Beaumaris in front of a big crowd at Boss James Reserve.

Hampton again were forced to field an undermanned team for the local derby and the experience of the Sharks showed on the day as they controlled the game. The Roves side consisted of U19 players Mat Care (senior debut), Alex Whalebone (6 snr games) Jack Sperring & Jack Wilson (2 snr games) as well as four of last years U19 players. With injury forcing many of the Rovers more experienced campaigners out of the side, the last few weeks has been a great opportunity to blood younger players and gain senior footy experience.

It was perfect conditions at the Boss with the sun out and only a slight breeze. It was a tight contest early on with Beaumaris taking around ten minutes or so to kick the opening goal of the game. They kicked a further three for the term with the Rovers managing the one. The Rovers lost ruckman Anton Duddy to a knee injury late in the term.

Mid-way through the second term, a Beaumaris player went down to what looked like a break to the lower leg and both teams were down to 21 players. Rovers kicked the next goal through Josh Verlin to bring the margin to two goals however from thereon it was all the visitors who booted six majors.

The young Rovers couldnt maintain the pressure in the second half and it was Beaumaris who reigned superior in a scrappy contest, kicking eight in the third and five in the final quarter to the Rovers six for the second half. The final margin was 93 points to the Sharks.

Leigh Fletcher was dominant for the Rovers and he was well supported by Jay Ting, Stuart Burggraaff and Richard Atkins who continues to improve with each game. Jack Wilson finished with three goals with two each to Josh Verlin and Jay Ting.

The Queens Birthday break couldnt have come at a better time for the Rovers. It will give the boys a chance to re-group and give some injured players an extra week to recover and hopefully return to the line-up for the Rovers next game against Marcellin.

It was great to see such a big crowd at Boss James Reserve on Saturday and in the rooms following the game  easily the biggest for the year. It was also Juniors day, with many of the Rovers junior players in attendance forming a guard of honour for the players to run through as well as a mini-game on the ground at half time. While the club may be struggling on the field at present, its as strong as ever off it.

The Reserves had a good battle but just went down by ten points. Brendan Culvenor, Nick Lyall and Daniel Anderson were best. Nick Evens, Jason Laver and Culvenor each kicked two goals. The Under 19s won by default after Oakleigh withdrew. While the Thirds went down to Ajax. Click Here for full results and match details.