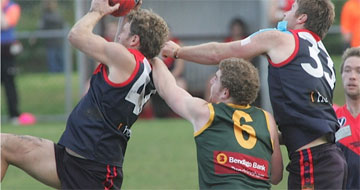 Old Brighton inflicted more pain on the Rovers miserable start to the 2011 season, getting up by plenty at Brighton Beach Oval.

Hampton went into the round seven Premier B fixture severely depleted and while the boys tried hard, they were well and truly overrun by an Old Brighton outfit that has turned the corner following a slow start to the year following their relegation from A grade last year.

It was ideal conditions for footy at Brighton Beach and while it was wet and slippery underfoot, the rain kept away and there wasnt a breath of wind  most unusual for that ground. The home side kicked towards the South Road end in the opening quarter and came out of the blocks all guns blazing booting the first four majors before the Rovers could get on the board. It was a six goal to two opening term from OB and the four goal margin was only increased by one at the main break with the Rovers still in touch.

However the second half belonged to Old Brighton as they went on to dominate the game, kicking seven goals in the third and eight in the last to the Rovers one and two. The Rovers still had plenty of players that tried hard all day such as the likes of Richie Atkins, Nick Henry and Leigh Fletcher.

Nothing appears to be going the Rovers way at present, but a win is surely not too far away and the players, coaching staff and supporters remain optimistic. With players due to start coming back into the side from this coming round, the only way is up. It starts this Saturday when the Hampton Rovers recommence their rivalry with Beaumaris in a much anticipated local derby at Boss James Reserve.

The Reserves started well against the undefeated Old Brighton, down by a couple of goals at the main break, but couldnt maintain the pressure in the second half as the home side came home to strong to win by 78 points. Lee Smith was best for the Rovers and Nick Evans kicked two goals.

The best news of the day came from Boss James Reserve where the Thirds had their first victory of the year  and in a big way  defeating Richmond Centrals by 82 points. Stay tuned for more of a report and match details.